So I knew I wanted to turn this coffee table into a game table of some sort, since it was no longer in my front room but now in my game room in the basement.  But I wasn’t sure how or what I was going to do about it. 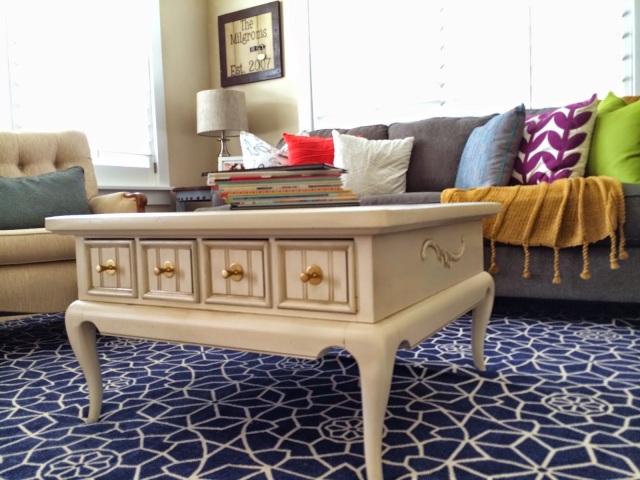 And then it came to me…. 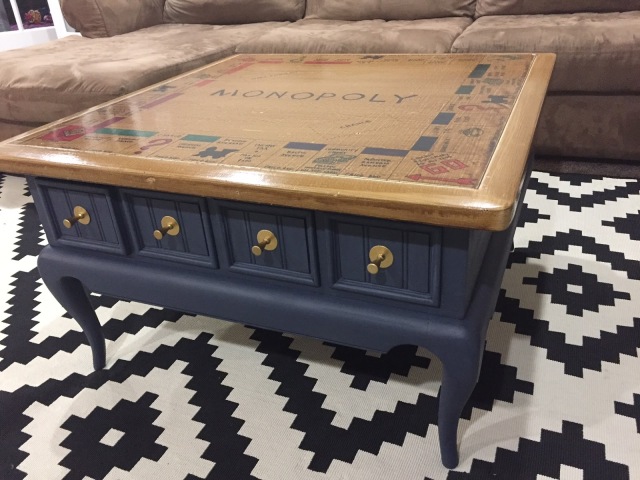 I thought of scrabble, checkers.. you know.. the typical game boards you may see on a “game table.”

But then I thought, “What other original games are there that everyone has played at least once in their life?” Answer: MONOPOLY.

The idea was born.

And so was the master planning:  Do I use paint? Markers? How will I seal it? Is it going to smear? Do I use an overhead projector?  Or free hand it? Do I want to keep it cream?

Once I came up with an outline of how I  was going to try this process out, I began..

I originally tried to use an overhead projector and was planning on printing out an image on a transparency of the game board and then tracing it on. But my table is such an awkward size and shape when it is on its side that the image would have come out slanted. If you have a table that you can prop up so that it is 90 degrees in the air on its side- GO FOR IT!! But for me, I knew I could probably pull it off by doing free hand; so that is what I did.

I referenced the game board I had to get the spaces correct. Using light pencil first to make sure my measurements were correct, I then used sharpie markers the rest of the way through. 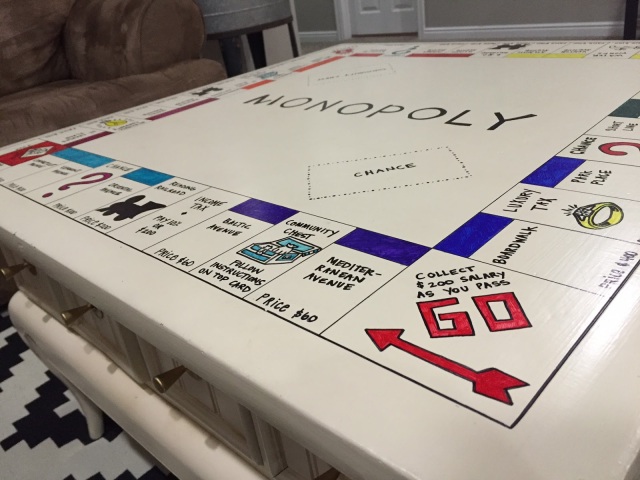 After a little over 4 and a half hours (and several episodes of TV)… I called it a night and let it dry.

The next morning, I decided to be brave enough to attempt a clear coat. Now I know from past crafty experiments that sharpie marker COULD potentially smear- even if it had been fully drying over night. I decided it would be best to do little portions at a time using the same color. So I would clear coat all the red, and being careful not to clear coat outside of the red so that it wouldn’t smear onto the white background. Then I would wipe of my brush, and do all the blue.  (I used polycrylic and a foam brush)

After all the colors were done, I used a new foam brush and gently covered all the rest of the “blank space” that had the black marker and cream background.

Once that set and was dry, I decided to darken it up a little bit, because it was too bright and bold for the décor I have in the game room. (I can’t wait to show you!) So I grabbed my stain, and brushed it on and then immediately wiped it back off. This picture is before wiping it off. 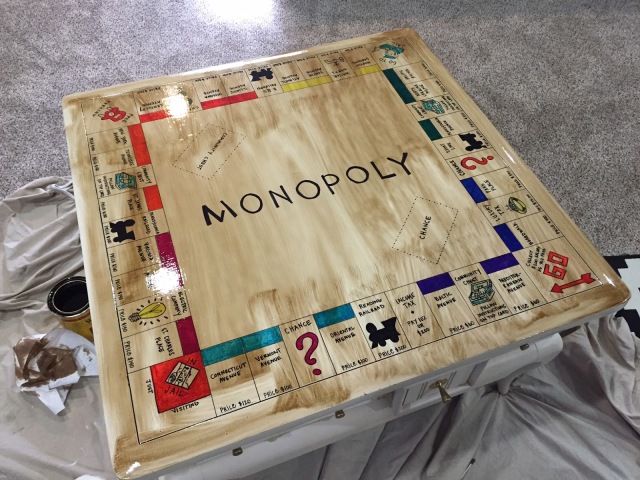 It tinted it a little bit, but figured I would try brushing the stain on, but this time not wipe any of it off. I have never tried that before, so I was taking a gamble, but that’s what experimenting is all about! Coming up with something unique- Right?!  So I went for it.

BUT.. it indeed eventually dry, and I was on to the next step: Painting the bottom half! 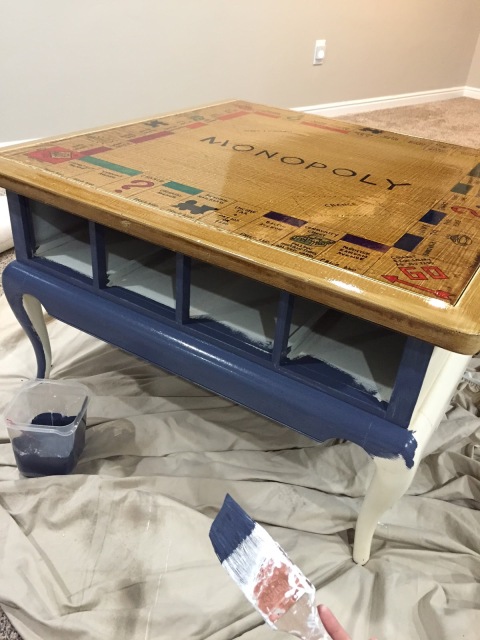 This navy is the universal color that has been showing up in almost every room in the house. So I figured it needed an appearance in the game room as well!!

After it dried, I sealed it again… And now I have a true MONOPOLY GAME TABLE!!

My family is so super excited to come over and play a good ole game of Monopoly with me sometime this weekend.. and to them I say, “IT IS ON LIKE DONKEY KONG!!” 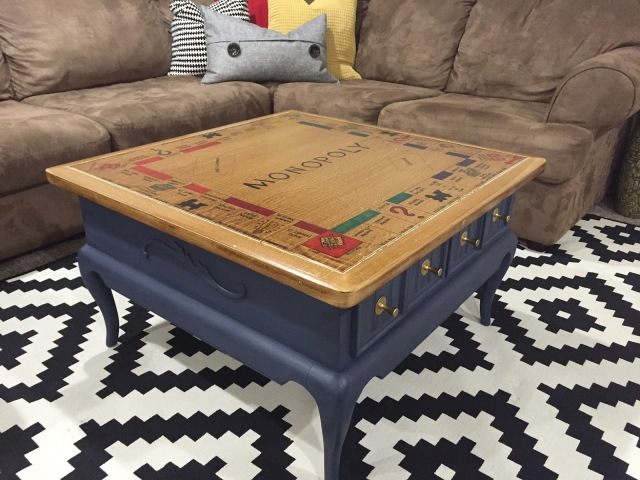 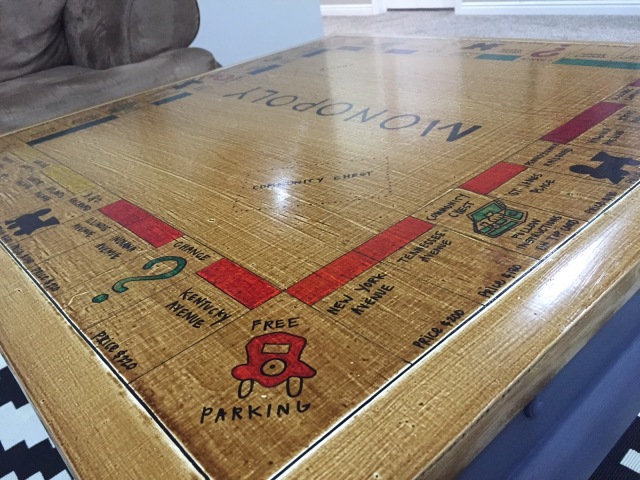 Do YOU have a game table in your house? If so, tell me about it!

Shotcrete is coming today for the pool!!! I can’t wait to be able to look out these windows and see a blue sparkling pool!
I decided to do a furniture swap and take the kids entertainment center from the loft and put in the entryway instead! It now holds all of our arts and craft supplies. I am really diggin’ the change! I sold the existing unit that used to be here, and I am waiting for the new entertainment center to come in the next few days for the loft! So excited!
Spring break is in full swing.. which means my house will pretty much be a disaster for the next two weeks. Any ideas on what I can do to keep kids entertained??
So thankful it is Wednesday and the week is half way over! Has anyone else had a super chaotic week already? Or is it just me? 🤷🏼‍♀️ Between wrapping up home projects and having service people out for one thing or another- I felt like I have been running around like crazy and I haven’t even left the house in several days! 🤪
Decided to give the guest room a little facelift with some faux brick and a new bed and rug! Whata ya think?
I just realized I never posted a picture of this half bath with the wood trim stained! It completes the look!

Serving Queen Creek, AZ and surrounding areas
By Appointment Only

Kirsie is a wife and mom of two adorable kiddos and owner of the blog, Ooh Lah Lah Designs; geared towards the American Mom who likes or wants to learn how to be creative and organized. Kirsie has her degree in Elementary Education, but her main passion is Organization, Interior Decorating and all things DIY with a minimalist mindset. She believes that organizing and decorating will not only give you that beautiful home you have always dreamed of, but will also remove anything that distracts you from living your highest quality of life.
Loading Comments...
Comment
×
<span>%d</span> bloggers like this: